FAITH NEWS SERVICE – Saginaw, MI: On Sunday, July 19 at 4pm EST, Detroit native and recent exoneree, Kevin Harrington, will join a panel of community leaders, legal professionals, activists, and criminal justice experts for a virtual townhall discussion purposed to expand the national conversation around police brutality and killings to include the untold narratives […] 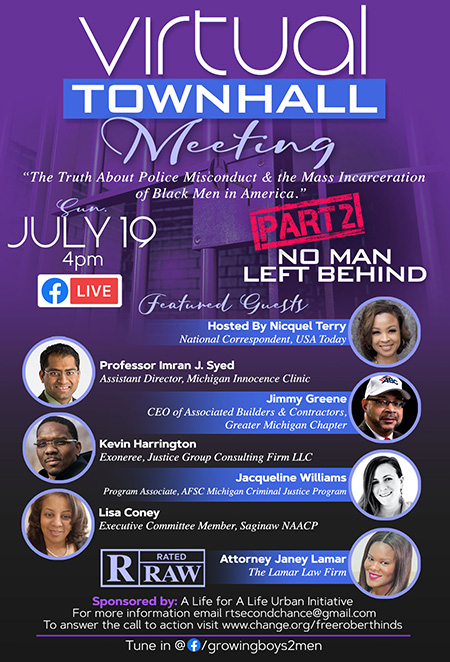 Saginaw, MI: On Sunday, July 19 at 4pm EST, Detroit native and recent exoneree, Kevin Harrington, will join a panel of community leaders, legal professionals, activists, and criminal justice experts for a virtual townhall discussion purposed to expand the national conversation around police brutality and killings to include the untold narratives of thousands of black men who have been wrongfully incarcerated and sentenced to die in prison due to the broad scope of police misconduct. Harrington was wrongfully convicted of murder in 2002 and sentenced to life in prison without parole. He spent 17 years, six months, and two days behind bars before his release Tuesday, April 21, 2020 from the Macomb Correctional Facility in Lenox, Michigan. Determined to lend his voice to speak for the numerous innocent men still behind bars fighting for freedom, Harrington is using his newly acquired platform to help make a difference in the lives of others.

The Townhall is sponsored by A Life for A Life Urban Initiative, a grassroots organization founded in Michigan in 2013 to help advocate for social injustice. This online event is the second segment of the organization’s three-part virtual townhall summer series titled ‘The Truth About Police Misconduct and the Mass Incarceration of Black Men in America.” The second segment of the townhall series is subtitled “No Man Left Behind” and will focus on systemic racism in the criminal justice system and the role that police misconduct plays in wrongful convictions. In addition, it will also issue a call to action to demand that police and prosecutors be held accountable for their choices; especially in Detroit, MI where police misconduct, false findings in evidence, and hiding exculpatory evidence has gained national media attention for more than a decade. More specifically, the townhall will spotlight pending exoneration cases in Michigan that allege police misconduct and explain the criminal justice process in Michigan for investigating claims of innocence and overturning convictions.

Among the cases to be discussed, Harrington will share his personal experience of being wrongfully convicted due to police misconduct, as well as spotlight cases that allege similar concerns and disturbing patterns like those of Robert T. Hinds and Alphonso Clark, Jr., both currently inmates housed at the Chippewa Correctional Facility in Kincheloe, MI. Charged with first-degree premeditated murder and possession of a felony firearm at the age of 17, Hinds was convicted of both charges and sentenced to life in prison without parole. After maintaining his innocence for years (specifically that he had no involvement with the crimes he was convicted of) and with the assistance of supporters, Hinds discovered a miscellaneous case file maintained by the Detroit Police Department. This case file contained exculpatory evidence that was wrongfully withheld from his state-appointed defense attorney during his trial in 2001. Within this miscellaneous case file, Hinds discovered the existence of an overwhelming amount of evidence supporting his claims of actual innocence including witness statements, DNA evidence, and usable fingerprints.

After losing over 19 years of his life in prison while pursuing every investigative lead to help gather enough evidence to prove his innocence, in April 2020, Hinds was finally able to file an exoneration application with the Wayne County Conviction Integrity Unit that alleges police misconduct in his case. However, things are not progressing as quickly as he had hoped. According to a Detroit News article published on May 25, 2020, the Conviction Integrity Unit with the Wayne County Prosecutor’s Office has been assigned to look into Hinds’ case, but assistant prosecutor Maria Miller said, “The status is that it is an open case. They have not done any work on it yet.”

While Hinds awaits news of his freedom in a Michigan prison, the COVID-19 pandemic continues to affect the lives of people across the world, including the prisoners and staff throughout Michigan’s prisons. With 68 prisoners across the state already reported dead on the MDOC website, Hinds states that he especially fears that the pandemic could threaten his life before his expectant release from prison.

Concerned family and friends of Hinds have started a petition on his behalf to urge the Wayne County Conviction Integrity Unit to expedite the investigation of his exoneration application. Supporters can sign the petition at www.change.org/freeroberthinds and financial donations to help support his exoneration process can be made at www.gofundme.com/freeroberthinds. More information about Hinds’ exoneration journey and community service over the years can be found at www.growingboys2men.blogspot.com. Hinds can also be contacted directly at www.jpay.com using the inmate ID 410196.

The virtual Townhall meeting will be streamed via Facebook Live from the business page of A Life for a Life Urban Initiative at www.facebook.com/growingboys2men. The final segment of the three-part series “The Families Tell All” is scheduled for Sunday, August 16 @ 4pm and will feature a new panel of experts including international speaker Barbara M. Littles, Esq. and former Assistant District Attorney of New York County, Ikiesha T. Al-Shabazz, Esq.