FAITH NEWSWIRE – Saginaw, MI: On Sunday, November 1 at 7pm EST, A Life for A Life Urban Initiative will host a virtual open mic event titled “Poetic Justice” in an effort to use artistic mediums to spotlight the broad scope and impact of police brutality and misconduct against minorities across the nation. In addition, […]

A Life for A Life Urban Initiative 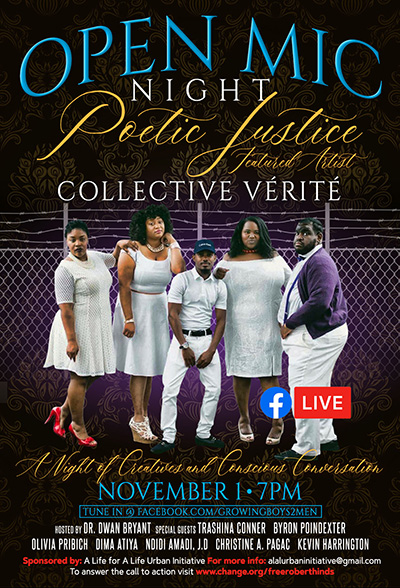 FAITH NEWSWIRE – Saginaw, MI: On Sunday, November 1 at 7pm EST, A Life for A Life Urban Initiative will host a virtual open mic event titled “Poetic Justice” in an effort to use artistic mediums to spotlight the broad scope and impact of police brutality and misconduct against minorities across the nation. In addition, the event will lend special attention to the disturbing narratives of inmates Robert T. Hinds and Alphonso Clark. Jr., both of whom are currently serving life sentences at the Chippewa Correctional Facility in Kincheloe, MI and who have applications pending with the Wayne County Conviction Integrity Unit that allege police misconduct as the cause of their wrongful convictions.

Hinds was charged with first-degree premeditated murder and possession of a felony firearm at the age of 17. He was convicted of both charges and sentenced to life in prison without parole. After maintaining his innocence for years (specifically that he had no involvement with the crimes he was convicted of) and with the assistance of supporters, Hinds discovered a miscellaneous case file maintained by the Detroit Police Department through a FOIA request. This case file contained exculpatory evidence that was wrongfully withheld from his state-appointed defense attorney during his trial in 2001. Within this miscellaneous case file, Hinds discovered the existence of an overwhelming amount of evidence supporting his claims of actual innocence including witness statements, DNA evidence, and usable fingerprints.

After losing over 19 years of his life in prison while pursuing every investigative lead to help gather enough evidence to prove his innocence, in April 2020, Hinds was finally able to file an exoneration application with the Wayne County Conviction Integrity Unit (CIU). Although it has been over six months since his application was accepted, and despite the vast amount of evidence from the Detroit Police Departments’ miscellaneous file supporting his claim of actual innocence, according to the CIU, there has still been no work done on his case to date. Clark was wrongfully convicted of first-degree murder in 2005 with no forensic evidence to support the conviction and sentenced to life in prison. He is also awaiting news of his freedom from the Wayne County CIU. Together, both men have served more than 34 years in prison.

Concerned family and friends of Hinds have started a petition on his behalf to urge the Wayne County CIU to expedite the investigation of his exoneration application as a result of the effects of COVID-19 in the MDOC and the high risk of his death if he becomes infected due to his extensive health issues. Hinds has a history of asthma, high blood pressure, thyroid issues, seizure disorder, and an irregular heartbeat. Supporters can sign the petition at www.change.org/freeroberthinds and financial donations to help support his exoneration process can be made at www.gofundme.com/freeroberthinds.

Organizers of the open mic event say they hope that this event, in addition to their previous community town halls highlighting Hinds’ and Clarks’ cases and the urgent need for prison reform in Michigan, will help encourage other social justice advocates to join alongside them in the fight for seeking exoneration for Hinds and Clark. In addition, organizers say that they are hoping that both men will receive relief soon and that their efforts will also bring hope to other wrongfully incarcerated inmates like them.

More information about Hinds’ exoneration journey and community service work over the last decade can be found at www.growingboys2men.blogspot.com. Hinds can also be contacted directly at www.jpay.com using the inmate ID 410196.

A Life for A Life Urban Initiative