FOR IMMEDIATE RELEASE ANCIENT GREEK RELIGIOUS TEMPLE AND VASE ART BOASTS OF THE TRIUMPH OF THE WAY OF CAIN (MAN AS THE MEASURE OF ALL THINGS) IN THE POST-FLOOD WORLD To Call Greek Religious Art “Myth” Is a Profound Insult to the Ancient Sculptors and Artists Author Robert Bowie Johnson, Jr. is pleased to announce […]

Author Robert Bowie Johnson, Jr. is pleased to announce that his latest book, the full-color “Genesis Characters and Events in Ancient Greek Art,” reveals for the first time the human Genesis identities of the key ancient Greek gods. Zeus and Hera, the first couple according to the Greeks, are the deified Adam and Eve of Genesis. Hephaistos, their eldest son, is the Cain of Genesis, the eldest son of Adam and Eve. Herakles is the Nimrod of Genesis, and Nereus (“the Wet One”) is the ancient Greek representation of Noah, and so on.

The key ancient Greek gods look just like people because they are people – exalted ancestors. The philosopher Socrates knew this quite well, referring in Plato’s Euthydemus (at 302d) to Zeus, Apollo and Athena as his “lords and ancestors.” 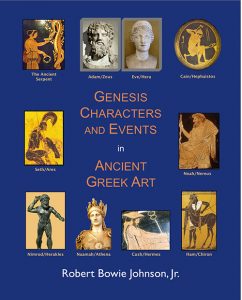 Mr. Johnson reinforces the truths revealed in his book in the following articles as well:

Ancient Greek Vase Celebrates the Exaltation of Our Ancestors as Gods

The Hidden Identity of the Woman Glorified as Athena: Her Link to the Pre-Flood World

According to Mr. Johnson, “The Greeks believed the ancient serpent ‘enlightened’ rather than deluded the first couple in paradise.” He added, “In ancient Greek religious temple and vase art, we find the origin in this age of so-called progressivism – the idea that God should be pushed out of the picture, and mankind exalted instead.”

Mr. Johnson is also the author of “Noah in Ancient Greek Art” and “The Parthenon Code: Mankind’s History in Marble,” translated into French and Greek.