Inspiring Couple Chooses Faith Over Fate: Why They Chose to Marry in Prison and What Their Ongoing Fight for Justice Looks Like Now

FAITH NEWS SERVICE – Marriage is a lifetime commitment. Especially when you marry someone doing a life sentence without parole. Reverend Erinna McKissick Hinds, 37, and Robert T. Hinds, 38, officially tied the knot on Monday, November 21, 2022 in Kincheloe, MI in a brief intimate marriage ceremony with the support of both of their […] 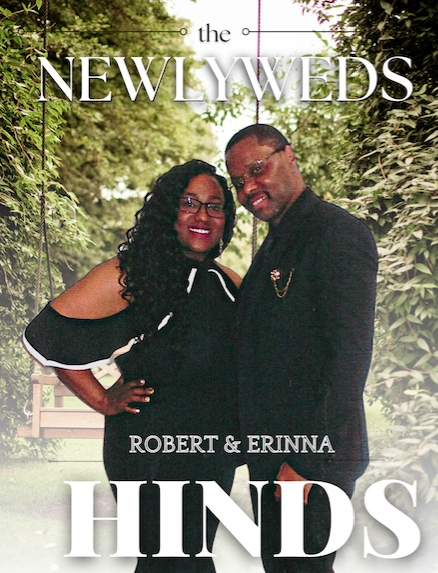 FAITH NEWS SERVICE – Marriage is a lifetime commitment. Especially when you marry someone doing a life sentence without parole.

Reverend Erinna McKissick Hinds, 37, and Robert T. Hinds, 38, officially tied the knot on Monday, November 21, 2022 in Kincheloe, MI in a brief intimate marriage ceremony with the support of both of their mothers, Pastor, and his wife. The couple shares a love for music, traveling and family. They also enjoy reading together, praying together, and engaging in lighthearted banter during an occasional competitive Scrabble game.

Over the years, their longtime friendship has grown into a heartwarming romance. As loving newlyweds, they are excited about creating new holiday traditions together and prayerfully expanding their family in the near future. But there is one major hurdle that they still have to overcome before they can fully enjoy a lifetime of marital bliss together…..Robert must first be released from prison.

After being wrongfully convicted of first-degree homicide at the age of 17, Robert has fought for over 21 years to prove his innocence, while adamantly maintaining that he had absolutely nothing to do with the crime that he is serving a life sentence for. More recently, Robert discovered a miscellaneous police file that was withheld from his attorney during his trial. Within the file were police reports and tip sheets that contained information that undermined, contradicted, or impeached the prosecution’s witness and theory of the case.

Mostly importantly, Robert discovered the existence of DNA evidence that could exonerate him, which was one hair follicle with the root-end attached that was never disclosed to his trial attorney or tested prior to his trial, as well as usable fingerprints and palmprints that didn’t belong to him and were also withheld from his trial attorney.

Once making the discovery, he immediately went to work trying to notify someone of this evidence so that it could be tested, and he could be exonerated, which led him to the Wayne County Conviction Integrity Unit (CIU). However, his hopes of being cleared by the CIU and home this year for Thanksgiving dinner with his new family, recently dissipated when he received a shocking update from his attorney that the Detroit Police Department was now unable to locate the evidence from his case and that without that evidence the CIU was unable to further assist him despite the clear Brady violations, police misconduct, and newly discovered evidence.

While the forecast for “happily ever after” seems dimmer now than ever, the couple still refuses to accept that Robert’s innocence will never be proven. Instead of postponing their wedding until he is released, they decided to move forward with exchanging vows a few days before Thanksgiving as a sign of their unwavering faith in God and one another, as well as to demonstrate their commitment to the hundreds of other supporters who have been following their journey for justice.

Erinna, a journalism and public relations graduate from Howard University, has worked diligently on Robert’s case since 2013, helping to create national awareness about the injustice he has suffered, as well as spotlighting the cases of a half of dozen others who have also been wrongfully convicted.

“We understand that this looks like a very bold (crazy) step to some people. But we also know that this is a God-ordained thing for us. He is leading us on this path and we are following.” Erinna, also known as “The Divorce Preacher” and author of “Leaving Egypt: From Trauma to Triumph”, says she is all too familiar with choosing God’s path for her life instead of seeking the approval of others. Having been in ministry for nearly 20 years, Erinna says that this isn’t the first time in her life that she has had her back up against the wall while following God’s call.

“When I started speaking about the casualties of divorce and abuse in the church, I definitely got some pushback. But you know what I did? I pushed back too. When God gives you an assignment, you can’t be more worried about what other people think than you are pleasing God.”

Now a certified domestic relations mediator in Michigan, Erinna has a growing Christian consulting company where she mediates divorces and coaches divorced and separated families into finding peaceful solutions for their “new normal”. She says that her efforts to create an honest platform for meaningful dialogue about divorce and abuse in faith-based communities is helping to save lives and heal marriages.

“I don’t believe in fate, but I do believe that faith moves mountains. When I obey God’s voice, He always causes me to triumph. It’s only a matter of time before this situation works out too. My husband is coming home.”

Robert, despite his precarious circumstances, has spent the majority of the past two decades maximizing every day he has spent inside to become a better person and overcome his own trauma and internal struggles. Having arrived at prison as a young 17-year-old black male with a third-grade reading level, the chances of his future success were slim to say the least. However, Robert began to defy fate again when he challenged himself to learn how to read by learning his first 300 words out of the dictionary and later again when earned his GED.

Dissatisfied with just having his GED, he went to college and earned certifications in Private Investigation, Alternative Dispute Resolution, and Victim Advocacy through The Center for Legal Studies and Bay Community College, finishing his courses with a 3.8 GPA. He also took courses to become a Certified Paralegal through Blackstone Career Institute and a Certified Fitness Trainer through the International Sports Science Association. In addition to Robert’s impressive academic achievements and certifications, he has completed over 30 other personal and professional development programs while in prison.

“I have worked hard to become the best version of myself I can be and to put myself in the position to contribute positively to the community once I am released. It hasn’t been easy overcoming my past struggles, but I have always tried to learn from my mistakes and to take every opportunity to grow. Although I am limited in terms of opportunities inside, I continue to network, study hard, and create opportunities for myself because that’s just the kind of man I am.”

Robert says that he thought long and hard about getting married before asking Erinna to be his wife, especially having been away from the outside world for over 21 years.

“I definitely prayed about it. I know that some guys want to get out and play the field before settling down, but God showed me that she is the only one for me. I don’t need to look for what I already have. My wife is beautiful, brave, and smart. She means the world to me. I feel like I won the lottery!”

Erinna says that she is very proud of her husband and the man he has become over the years. “He compliments me very well. It’s been amazing to watch him grow into the man he is today. He literally has all of the character traits that I prayed for and some I didn’t pray for, but God knew that I needed. I married my best friend. He’s definitely my person.” Erinna says that she is also extremely grateful for their small village of family, friends and church family who continue to offer them unwavering support on their journey.

When asked what is on the horizon for the two of them, Robert and Erinna said that they will continue to fight tirelessly for his freedom by working with his attorney, legal investigator, and anyone else willing to help fight his wrongful conviction.

“Once I am released, I know that it won’t be an easy journey readjusting, but all of the adversity and bumps in road have been worth it,” Robert says. “Erinna’s encouragement has given me an alternative way to use my energy and God-given grind. She helped me channel my ambition in a more productive way.”

The couple also says that they are focused on carving out quality time for juggling the unique dynamics of their new blended family.

“I’m really excited to be a bonus dad. I can’t wait to take my family to Disney World or Tanzania and just live. I’m ready to just live.”

To learn more about Robert’s innocence journey and to sign the petition for his release visit www.change.org/freeroberthinds.

Inspiring Couple Chooses Faith Over Fate: Why They Chose to Marry in Prison and What Their Ongoing Fight for Justice Looks Like Now