The American missionary in Australia and his struggle with bipolar disorder

FAITH NEWS SERVICE – Steve Swartz is an American who left the comforts and familiarity of small-town Ohio to answer the call of God into missionary work. Ending up halfway around the world, Steve and his wife, Bev, landed in Alice Springs, which is about as remote as you can get in Australia’s rugged outback. […] 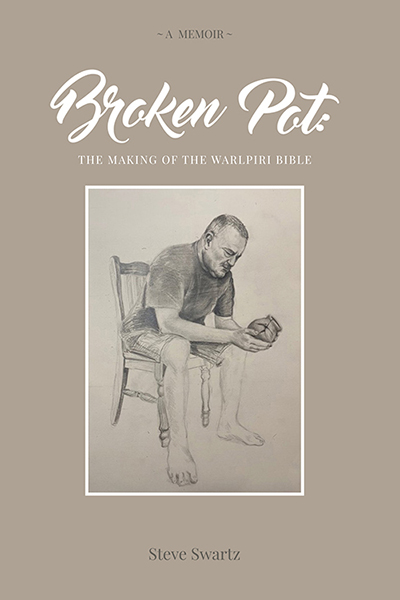 FAITH NEWS SERVICE – Steve Swartz is an American who left the comforts and familiarity of small-town Ohio to answer the call of God into missionary work. Ending up halfway around the world, Steve and his wife, Bev, landed in Alice Springs, which is about as remote as you can get in Australia’s rugged outback.

His new book, Broken Pot, is a brilliant recount of their remarkable lives.

The call to work as a Bible translator took Steve to the middle of Australia, where he worked translating the Bible for the Warlpiri Aboriginal people of Central Australia as a missionary with Wycliffe Bible Translators.

However, that is just half the story. This missionary has achieved all he has whilst battling daily with bipolar disorder. “I was misdiagnosed from 1980 to about 2017 as suffering from ‘mere’ depression,” Steve told me.  “For many of those years and even after my actual suicide attempt in 1986, I was not placed on a regimen of anti-depressants, but rather, I had to rely on various psychological ‘talking and cognitive’ therapies and the exercise of the spiritual disciplines of Bible reading, meditation, prayer and interpersonal interactions with other to try to maintain some level of sanity, often without much success.

“From 2000 until 2017 and for various periods, I was taking anti-depressants on an on-again-off-again basis.  As time went on, and as I began experiencing periods of extreme manic, though often highly-productive, energy followed by more-extended periods of deep depression, it finally became clinically apparent to my doctors that my mental condition was more-correctly diagnosed as Bipolar Type 2 disorder, which is now treated pharmaceuticaly in a fashion quite different to depression.”

Being asked to sum up his bipolar disorder, Steve used one word: unpredictability. “It was bad enough with me being depressed for months or even years at a time,” Steve told me. “We could make adjustments and accommodations to survive these times, but neither Bev nor I could predict when, in a blink of an eye and without warning, rhyme or reason, my mind would switch from Black Dog to hyper-speed.

“I could be crazily productive during these times or at other times just a gibbering maniac, bubbling over like Mt Etna, erupting with all sorts of wild and wonderful projects. I would feel unbelievably wonderful and marvelous, but more often than not, from Bev’s perspective, I would simply be angry, rude and insufferable.

“Two of these high periods, one in 2007 and another in 2019, resulted in two 30-day periods where, each time, I penned some 60,000 words, which now have turned into this 129,000-word memoir. I didn’t start out 13 years ago to write this memoir – it wrote itself. Was it the bipolar mania, the Holy Spirit or both? I cannot tell the difference.”

With mental health challenges yet to manifest themselves, Steve moved to the other side of the world in obediently following God’s calling. For many of us, we take reading the Bible for granted. In fact, if you read the stats, Bible reading amongst Christians is way down. Yet Steve and his wife gave up their comfortable, American lifestyle to make this possible for a small Australian indigenous tribe – just so they would have access to God’s Word.

“In retrospect, it is fair to say that I did not handle the transition (to Australia’s outback) very well at all,” Steve said. “If I had, then I would not have had much of a memoir to write about.  There was, of course, the initial transition from the USA to Australia, two very different countries and cultures, despite common English origins and a ‘shared’ language.  Cultural-linguistic-historical presuppositions are so different, often in ways initially not apparent.

“For example, Americans (at least conservative ones such as myself) are much more patriotic than Aussies.  Aussies, in general, are much more patriotic nowadays than they were forty years ago.  At that stage, if the Australian National Anthem was played at a sporting event, many Aussies would not stand and fewer would sing along.  Bev and I thought this very strange and not a little rude.  Aussies had, and to a lesser extent still have, more of a cultural cringe, tug-the-forelock, embarrassed attitude towards the Brits than do Americans.  We found something of an underlying hostility at times to us for simply being American – how could everyone in the world not love the Yanks?  We understand this better now.”

For Steve and Bev, there were the climatic differences they also had to deal with. Ohio and Michigan have four distinct seasons, including ice and snow) in Midwest America. They moved into a two-season, hot, monsoonal climate of stifling proportions.

Then there was the transition into yet another culture. After their first six months in Darwin, the couple moved to Lajamanu in April 1978 to live among the Warlpiri people at Lajamanu in the Northern Territory, a very remote and isolated Aboriginal community. When they arrived in Lajamanu, there were no phones, only a public radiotelephone at the council office. There was only one, poorly-stocked store where everything was expensive. Mail came in by plane twice a week, and there was no TV or up-to-date newspapers or magazines.

“Bev and I came as linguist-translators, as opposed to other job categories within Wycliffe such as literacy workers, school teachers, builders, administrators, pilots, radio techs, computer texts, academic scholars, and so on,” Steve continued. “Our assignment was to work with the Warlpiri people, a group we knew nothing about before our arrival in Darwin in late 1977.

“In the early 90s, I became an international translation consultant, which gave me the opportunity with work with many other translators here in Australia, the Solomon Islands and even Hawaii to ensure quality control of their translation into many different languages.”

Steve’s mental health frailties have been a part of his entire time living in Australia. Suicidal depression was a regular challenge and even now, while those deep emotional (and dangerous) troughs are more of a rarity, it’s one day at a time to maintain an even keel. Many Christians, despite their love for their Creator, also face similar challenges.

A major part of the motivation in writing Broken Pot is to share his experiences with bipolar disorder and to encourage fellow Christians and non-Christians alike. Steve wants it known that God can still use someone amid depression and/or bipolar, even when complete healing is not forthcoming.  “Continuing to be depressed or bipolar does not necessarily indicate that God has rejected you or that you have a lack of faith for full healing,” Steve continued. “He can still use ‘damaged goods’ to achieve His purposes.  It can be argued that He chooses people of certain personality types to engage in certain ministries. For example, I do not have a naturally pastoral or gentle personality, which would lend itself more to a pastor’s heart for his flock, but I do possess a natural determination and hard-headedness, which means that having set my mind and heart on a goal, I persist through hell and high water to achieve that goal.”

“Sometimes the process is not easy, such as is the case with my dear wife Bev, who has suffered much being married to me, witnessing my struggles, worrying, praying for me, and trying to ‘hold me together’. I owe her a debt that I will never pay off in full.

“I am not the same as I was when we first came to Australia, and that is a very good thing.  I was 25 and Bev was 23.  I was, without overstating the case too much, a self-assured, arrogant young man, used to academic achievement, sure that I would make quick work of learning Warlpiri and completing a translation. Nothing proved as easy as I had naively expected once we arrived in Lajamanu.  These early difficulties led quickly to feelings of failure and ineptitude, which then spiraled quickly into depression and eventual suicide attempts.

“My recovery from the 1986 suicide attempt took over two years in the United States—it was a protracted and difficult time. Bev and I returned to active service in 1989, based here in Alice Springs. During the 90s, I struggled amid ongoing mental health struggles to bring the Warlpiri translation (full New Testament and 12% of the Old) to completion and publication in 2001 followed by our retirement from Wycliffe in 2003.” In Broken Pot, this powerful memoir informs, educates, entertains and challenges readers to not give up on what God has started. Moreover, it is sincerely hoped that fellow-sufferers of the Black Dog and other forms of mental illness will come to realize that God has not abandoned them, that He can still use cracked pots to accomplish His purposes and that there is help for them even in the darkness.”

The American missionary in Australia and his struggle with bipolar disorder