Proceeds from sales of the collectable medallion to promote regional peace efforts “And He shall judge among the nations…and they shall beat their swords into ploughshares, and their spears into pruning hooks: nation shall not lift up sword against nation, neither shall they learn war any more.” (Isaiah 2:4) FAITH NEWS SERVICE – Israel – On September 15 2020, President Donald J. […] 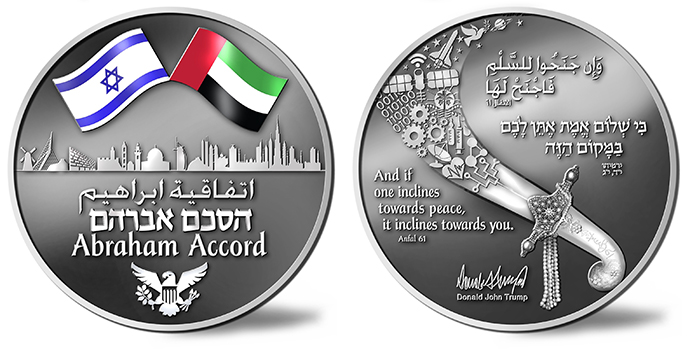 “And He shall judge among the nations…and they shall beat their swords into ploughshares, and their spears into pruning hooks: nation shall not lift up sword against nation, neither shall they learn war any more.”
(Isaiah 2:4)

FAITH NEWS SERVICE – Israel – On September 15 2020, President Donald J. Trump hosted the signing of the “Abraham Accord,” a groundbreaking Middle East peace treaty normalizing relations between Israel and the United Arab Emirates. In signing the accord, the United Arab Emirates (UAE) joined Bahrain, Egypt and Jordan as the only Arab nations to make peace with Israel.

“The Abraham Accord will prove to be the moment when the grievances of the past no longer overpowered the promises of the future in the Middle East” said Pastor Johnnie Moore in a statement to the media.

To mark this historic occasion Temple Coins has minted a limited quantity of ornate commemorative medals stunningly designed by master numismatic artist Aharon Shavo. The front of the medal is adorned with the Israeli and UAE flags, flying over an intricate silhouette of the holy city of Jerusalem, Israel’s eternal capital, and Abu Dhabi skylines, which merge together in symbolic unity.

Immediately below the skyline are the words “Abraham Accord” inscribed in Arabic, Hebrew, and English. Abraham was the father of monotheism. The familiar Bible character is referred to as ‘Abraham’ in the Christian faith, ‘Ibrahim’ in the Muslim faith, and ‘Avraham’ in the Jewish faith, and no person better symbolizes the potential for unity among all these three great faiths. An eagle holding an olive branch and arrows, the Seal of the President of the United States, completes the front design.

This historic medallion is available for purchase at www.Temple-Coins.com for a limited time for $150.

Inspired by the words of the prophet Isaiah, “And they shall beat their swords into ploughshares” (Isaiah 2:4), the back of the medal features a sword that gradually morphs into symbols of peace, prosperity, agricultural and technological advancement.

Temple Coins Director Jason Glick said, “These quotes encapsulate the central teachings of the faiths of Abraham; Judaism, Christianity and Islam, that one has a moral duty to seek out and embrace peace.”

The signature of Donald John Trump, without whose tireless efforts the “Abraham Accord” would not have been possible, rounds off the rear design. The President has been nominated for the Nobel Peace Prize for his determination and tenacity in making this historical and religiously significant accord become a reality.

Temple Coins Director Jason Glick added, “In addition to peace between former enemies, the region and indeed the world will benefit from economic prosperity. There is a younger generation in the region that deserves better, safer and more prosperous lives. Immediately following the normalization Israeli and Emerati companies signed agreements to work together for a cure for Covid 19, as well as cooperation in the fields of health, infrastructure, science, agriculture and energy.”

Israeli Prime Minister Benjamin Netanyahu told the media, “Peace is a good thing and peace unites moderates, two of the most advanced economies in the world – Israel and the United Arab Emirates. We’re fighting Iran and the radicals who are trying to overthrow our order in the Middle East, subjugate people and propagate terrorism. So, this is good for peace, good for security, and good for prosperity. I think it’s good for the United States and good for Israel.”

King David, who wrote prophetically in so many of his Psalms, exhorts us in this way, “Seek peace and pursue it” (Psalm 34:15).

In fact, the Hebrew expression in Psalm 34 implies running and chasing peace, almost hunting it down. Indeed, the Bible repeatedly conveys God’s desire that we should be peacemakers, doing our best to live at peace with everyone.

“Blessed are the peacemakers, for they shall be called sons of God.” (Matthew 5:9)

There are also scriptural reasons to be encouraged by the new links of peace forming in the south. There are several positive references to Sheba and Dedan (the Persian Gulf area) in relation to Israel in biblical prophecy. One example is from Isaiah 60:6, with similar hints in Psalm 72:10 and Ezekiel 27.

Individuals can be part of these exciting times and the fulfilment of the biblical prophesy by acquiring this limited-edition Abraham Accord commemorative medal. This historic medallion is available for purchase at www.Temple-Coins.com for a limited time for $150.

One third of each commemorative medal sale will go directly to a fund that will help foster stronger economic ties and partnership between the United Arab Emirates and the State of Israel. Not only will you be acquiring a highly collectable memento of this historic occasion, but also your purchase will allow you to directly partner with the peace process itself.

Temple Coins is Israel’s leading maker of historic and artistic medallions for the religious investor and seeker. More information at www.Temple-Coins.com