Should Evangelicals Terminate Their Affair With the State of Israel? By Rev. Alex Awad

For Years, I, a Palestinian and evangelical, have watched with pain the unholy alliance of evangelicals and the State of Israel. Evangelical infatuation with Israel began before there was a Jewish state in the Holy Land. British evangelicals, some of whom were Christian Zionists, helped bring the Jewish state into existence. This fixation kept deepening […] 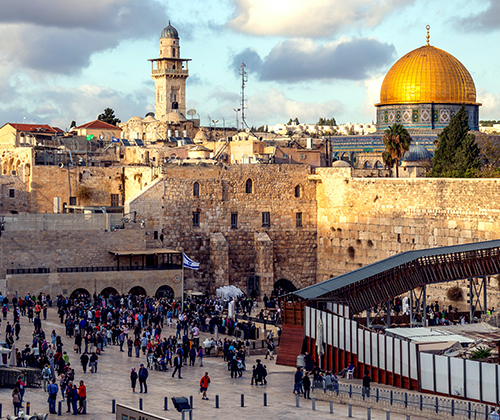 For Years, I, a Palestinian and evangelical, have watched with pain the unholy alliance of evangelicals and the State of Israel. Evangelical infatuation with Israel began before there was a Jewish state in the Holy Land. British evangelicals, some of whom were Christian Zionists, helped bring the Jewish state into existence. This fixation kept deepening in the last seven decades. We used the Bible, our pulpits, publications, politics, finances, and our radio and TV stations to expand the territory and power of a Zionist state in Palestine. The average evangelical in the U.S. does not realize the volume of hurt and harm that the political might of evangelical leaders has wrought on the people of the Middle East and especially on Palestinians.

Students of church history are aware that Christians made appalling mistakes in the last two millennia. Now, we reflect back on the crusades, the pogroms, the inquisition, colonialism, slavery and apartheid in South Africa and we ask ourselves, “How could Christians have supported such inhumane and bloody injustices in the name of Christ?” Yet, evangelical collaboration in the establishment of Israel and our continued uncritical support of Israel will be added to the list of bloody injustices. Future students of church history will be asking the question, “How could evangelicals who never stop preaching sermons on God’s love for all people, have been so callous toward the dispossession, death and suffering of millions of Palestinians and Arabs throughout the Middle East?”

During the last 75 years, evangelical leaders have actively supported every Israeli and American war against Palestinians and Arabs. Furthermore, our leaders considered any peace settlement between Israelis and Palestinians that resulted in Israel giving territory to Palestinians as out of sync with the will of God. Hal Lindsey, Pat Robertson, John Hagee, James Dobson and others were openly critical of U.S. presidents who urged Israel to make territorial compromises to end the conflict. Some went as far as linking natural disasters taking place in the U.S. as God’s punishment caused by presidents pressuring Israel to make territorial compromises. In 2016, Christian broadcaster Robertson claimed that former Israeli Prime Minister Ariel Sharon was stricken by God and ended up in a coma due to his withdrawal of Israeli forces from the Gaza Strip. Later he apologized for making the statement.

Not all evangelicals are as extreme as their leaders; however most white U.S. evangelicals are either complacent or extremely silent on issues of justice. At any time in the future, if Israel decides to wage a war on an Arab or a Muslim country, evangelicals, as usual, will demand full U.S. military, financial, and political support for Israel regardless of the causes or consequences of such a war. Rev. John Hagee had even urged President Barack Obama to attack Iran to eliminate Iran’s perceived threat to Israel. Since Donald Trump became president, he has given Israel everything that Israelis, extreme Zionists, and my evangelical brothers and sisters asked from him—and even more. Trump’s permissive policies toward Israel are inspired not by moral factors or political advantages to the United States, and certainly not to help bring about a peaceful end to the Arab-Israeli conflict, but rather to please his base of white evangelicals who voted him into office.

But, evangelicals should end our affair with the State of Israel because Israel is behaving illegally, immorally and recklessly and these are not evangelical values. Let me explain why.

Immoral behavior: Evangelical support for the policies of the State of Israel contributed to the death, the injury and the dispossession of millions of Palestinians and continues to pile more death, destruction and loss of homeland and freedoms. Palestinian Christians and Muslims continue to be considered collateral damage on the altar of evangelical eschatological speculations. We close our eyes and hearts to Palestinian suffering and refuse to question Israel’s daily crimes against them. This is simply due to our zeal to see our prophetical agenda come to fulfillment. In the parable of the Good Samaritan, we continue to play the role of aides and cheerleaders to the robbers and assailants on the Jericho Road. Such attitudes contradict not only the ethical teachings of Christ and his apostles, but they also go against basic evangelical theology and tradition.

Reckless behavior: Evangelical support of the occupation of Palestine and the siege of Gaza torpedoed all efforts to arrive at a peaceful resolution of the conflict. John Hagee, addressing the American Israel Public Affairs Committee (AIPAC) convention on March 11, 2007 said, “America should not pressure Israel to give up land and America must never pressure Israel to divide the City of Jerusalem.” Hagee’s prophetic agenda does not allow for any compromise for the purpose of making peace. The tragedy is not what Hagee believes but rather what the millions of evangelicals who follow him and his counterparts believe. Consequently, the continued occupation and the absence of a viable solution is making Israel an apartheid state. Intentionally or unintentionally, evangelicals have pushed Israel to become the apartheid state that it is today. If we continue to approach the conflict through our narrow eschatological prism and refuse to consider issues of legality, morality and justice, we will continue to be culprits in this blood-stained conflict.

When we heed the words of the prophet Micah, we may end our political recklessness. He declared:

With what shall I come before the Lord
and bow down before the exalted God?
Shall I come before him with burnt offerings,
with calves a year old?
Will the Lord be pleased with thousands of rams,
with ten thousand rivers of olive oil
Shall I offer my firstborn for my transgression,
the fruit of my body for the sin of my soul?
He has shown you, O mortal, what is good.
And what does the Lord require of you?
To act justly and to love mercy
and to walk humbly with your God.  Micah 6:6-8 (NIV)

Israeli Prime Minister Binyamin Netanyahu is threatening to annex much of the West Bank to satisfy Jewish settlers and right-wing Israelis. Most nations, most Christians, and the majority of American Jews are against the possible move. His plans are illegal, immoral and reckless. Evangelicals have the opportunity either to support annexation and continue to lay another brick to the wall of their historical mistakes or terminate their love affair with Israel and side with legality, morality and justice, and start working for genuine peace for all the people who call the Holy Land home.

Rev. Dr. Alex Awad is a retired United Methodist Missionary. He and his wife, Brenda, served in Jerusalem and in Bethlehem for more than 25 years. Rev. Awad served as pastor of East Jerusalem Baptist Church, dean of students at Bethlehem Bible College, and director of the Shepherd Society. Awad has written two books, Through the Eyes of the Victims and Palestinian Memories. Rev. Awad is a member of the Palestinian Christian Alliance for Peace (PCAP).

Should Evangelicals Terminate Their Affair With the State of Israel? By Rev. Alex Awad