FAITH NEWS SERVICE – The highly anticipated release of Top Gun: Maverick, the sequel to the 1986 iconic box-office Top Gun hit, makes its long-awaited debut in May 2022, three years after its originally scheduled release date.* Its original 2019 release date would have coincided with the fiftieth anniversary of the Navy’s real-life Fighter Weapons […] 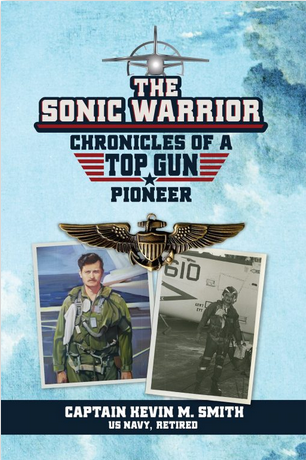 Its original 2019 release date would have coincided with the fiftieth anniversary of the Navy’s real-life Fighter Weapons School—famously known as Top Gun, and founded upon the realization that US flight crews were inadequately trained for close-in aerial combat.

Producer David Ellison said the Top Gun sequel explores “the end of an era of dogfighting,”** which is also what brought about the creation of the elite Top Gun institution when US officials incorrectly assessed that the dawn of the missile age meant an end to one-on-one dogfighting combat.***

Captain Kevin Smith was chosen as part of the team commissioned to quickly revamp close-in-air-combat training for the F-4 Phantom II flight crews being deployed to Vietnam, beginning the elite legacy of Top Gun. Smith’s book, The Sonic Warrior: Chronicles of a Top Gun Pioneer, offers a riveting inside look at the fighter-pilot community from the sixties through the eighties and highlights episodes in his career, including his role in the launch of the aircraft carrier version of Top Gun; his experience flying two supersonic-capable airplanes, particularly the F-8 Crusader; and his perspective on executing combat maneuvers at sonic speeds.

“The Top Gun movies portray the intensity and excitement of aerial combat training,” Smith says. “My real-life Top Gun experience is equally fascinating and provides an inside look at supersonic flight and combat operations near, at, or beyond the speed of sound. Aviation training set the pattern of my life, forever changing how I see the world and behave in the world.”

Beyond a personal memorial and historical account of supersonic aviation, The Sonic Warrior is also an inspiring study in leadership and critical thinking, providing Smith’s valuable insight into solving complex problems and optimizing human performance in any high-stress, intense scenario.

“Air-combat fighting is not just about the aircraft,” Smith says. “It’s about the magnificence of the human spirit and the human ability to perform in stressful and trying environments.”

With a glossary of aviation terms for easy readability, The Sonic Warrior is written for leaders in any industry as well as for aviation enthusiasts and veterans.

ABOUT THE AUTHOR:
With a distinguished twenty-five-year career in the United States Navy, Captain Kevin Smith was among the pioneers of the elite Top Gun training institution. Smith’s unit was optimized to provide advanced close-in-air combat training for the initial deployment of the highly advanced F-14 Tomcat. For this successful deployment, which set a number of records, he received several awards and commendations, including a citation awarded by the commander, United States Seventh Fleet. Since retiring from the Navy, Smith has headed up the Advanced Qualification Program (AQP) initiative to redesign airline pilot training, now utilized by every US airline; consulted with Lockheed on the design of the crew station for the F-22 Raptor, the first fifth-generation fighter; and worked as a commercial airline pilot. He is also a speaker and author, specializing in critical thinking.