FAITH NEWS SERVICE – For boys, the identity they gain just from being in the presence of their father is essential in shaping and molding their lives. However, in the case of Ian Heard, he never got that chance. Ian’s war hero father was sent off to war in World War II to fight for […] 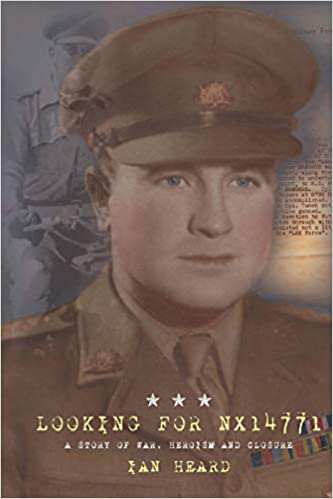 FAITH NEWS SERVICE – For boys, the identity they gain just from being in the presence of their father is essential in shaping and molding their lives. However, in the case of Ian Heard, he never got that chance.

Ian’s war hero father was sent off to war in World War II to fight for Australia. In the process, his life was lost, leaving his young son to move from boy, to teen, to young man, without his father there to model his identity and support and encourage him.

The loss was something that weighed upon Ian heavily, and as such, he has released a biography to share his story of growing up and searching for his identity in his father-less world.

In Looking for NX1477, Ian shares the pain and struggles of not ever knowing his dad. In his words, “a ripping yarn becomes a gripping yarn.” Translated from his Aussie colloquialism, that simply means that this book will captivate you.

“What spurred the effort in putting the story together was a simple desire that we all have, and that is to understand who we are… to connect with our forbears and understand better their DNA and how it reflects on who we are,” Ian said.

“In my case, my father was mostly a heroic mystery and a time came when I wanted to ‘know’ him and so my research began. It is about discovery; about ‘finding’ the father I never knew.”

Ian has shared his story in front of thousands of people in churches, clubs and elsewhere.

“I wrote the book for a number of reasons,” he added. “It has broad appeal to a fairly wide age-group because many my age have lost family in the two great World Wars, or Vietnam, or elsewhere—and younger generations are also showing renewed interest in history, as evidenced by their ‘pilgrimages’ to Kokoda, Gallipoli and even Vietnam’s killing fields.

“There is also renewed interest by people in tracing their roots and family history, while it is also a story that draws people in to its series of coincidences. In addition to this, the book has an excellent Gospel application.”

In part of his series of coincidences, he is lucky to have been born at all. In August, 1942, Ian’s father was given a few days’ leave from the war, in which time Ian was conceived. His father went back to war soon after and was then killed in the frontline. In his words, “I am not here by chance!

“For some reason, sitting in my office on a day that’s now chiselled on memory stones, I looked up the website of the Australian War Memorial. It demonstrates, really, that the issue of identity and connection is never really far beneath the surface for any of us. It is my firm conviction that the essence of each person’s ultimate identity resides not in earthly ancestry—as rewarding a search as that can be—but in our true Source, as we shall see.

“Our temporal and earthly DNA is from earthly parents, but there is also within us what I like to think of as our spiritual ‘DNA’, sourced from the One who, we are told, had us in mind—before time began.”

Ian is also a pastor, bible teacher, author, businessman and a keen sailor. He is a member of the ACM Network (Associated Christian Ministries) in Australia and attends Sydney’s Northern Beaches Christian Centre, where he regularly ministers, as well as in other churches.

Ian writes on Biblical subjects and comments from time to time on current and personal events in an attempt to contribute clarity and Biblical certainty.

Looking for NX1477 is now available both within Australia and globally.