Just when you decide to forget about it, along comes Terry McIntosh. He’s not a recognized name in the world of quantum physics but his exciting conclusions might change that. His theory of time and things mysterious may be destined to revolutionize Christian theology regarding creation and all things cosmic. His book, The Time Particle, […] 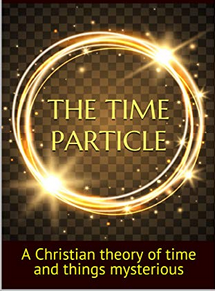 Just when you decide to forget about it, along comes Terry McIntosh. He’s not a recognized name in the world of quantum physics but his exciting conclusions might change that. His theory of time and things mysterious may be destined to revolutionize Christian theology regarding creation and all things cosmic.

His book, The Time Particle, delves into spooky things that Christians often wonder about but fail to explain when others ask about it. There’s things like prophecy, time loops, time travel, aliens, predestination or free will questions that stump a lot of us because we don’t know how to answer it satisfactorily. That leaves a void that needs be filled. How does it work? The Time Particle brings clarity to it all.

According to Terry, things Christians can’t explain are explained with revelation of the pseudoscience Time Particle. “It’s a new approach to all things cosmic,” he says. “Nobody really knows what time is until now. It’s much more than a measurement of movement. It’s a real thing. Among other things, it’s God’s memory book.”

Science may or may not adopt his conclusions but Terry believes he’s on target because it’s rooted in known science at quantum levels. “Time will tell the tale,” he says, and jokingly adds, “no pun intended.” The hypothesis covers events from before, during, and after creation week.

Terry isn’t a stranger to controversial subjects. He is CEO of the Jesus Christ Embassy Palestine, which is a Christian organization promoting reconciliation of Jews and Palestinians. He previously authored, “I Shall for the sake of my holy name” which, he says, upset some peers. “Truth is a tough pill to swallow but God’s truth finds it way into the hearts of his saints.”

Regarding the Time Particle, Terry has already been hammered hard by atheists who oppose anything God related. “God haters attacked the hypothesis in a public forum without even knowing its content. Maybe it frightens them? I expect them to organize bad reviews to diminish its value to potential readers once it goes live. Closed minds impede progress.”

Terry was introduced to the subject in a dream that led him to the exciting new concept of time, why it exists, and how it works. He says, “We live in an age where knowledge abounds, and so much of it is contrary to God’s truth. Science offers answers to legitimate questions whether right or wrong. If Christians can’t give the right answers, it’s expected that others will adopt the godless explanation. The questions posed are the same ones that people of faith are confronted with. Someone will say that imparted faith is all that’s required and that’s enough. True, God imparts faith but he also gave us a mind to reason with. He said as much in Isaiah 1:18.”

Terry goes on to say, “All we need to know Christ and live good, godly lives is in the Bible but we want to know more and that’s okay, I’m excited that the Lord is giving us a glimpse into his handiwork. It has a divine purpose. The revelation of how time works and it’s eternal significance is imparted first for edification of the church. Secondly, perhaps it will eventually serve science as well. It needs a new concept of time and this is it. It’s not mandatory to understand the mysteries of God to be saved, but it’s very helpful in bearing witness of a living God who created time. It’s for those with inquiring minds,” he says with a smile.

The book is a short read but you’ll likely read it more than once. It goes live on November 1. The retail price is $6.95 for the e-book version and $11.95 paperback. You can pre-order the e-book for $4.95 and save a couple of bucks. You can reserve your copy at The Time Particle.