How you can ensure you’re one of Life’s Winners.. and not one of the Few Losers.

FAITH NEWS SERVICE – Most of us have had a few losses in life and need to find our ‘mojo’ to once again have the courage to get up and have another try. It’s unfortunately a part of growing up and becoming an adult. We dream big, we try the impossible… and sadly, many times, […] 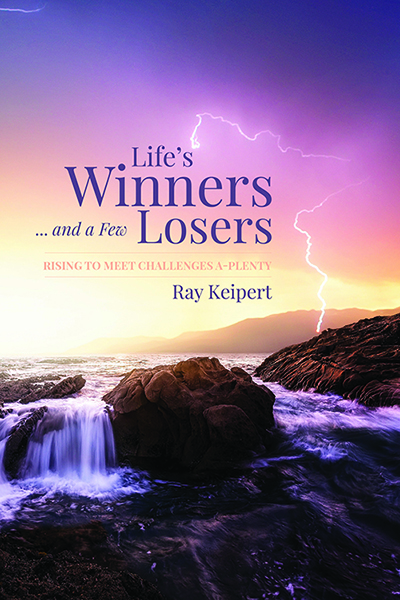 FAITH NEWS SERVICE – Most of us have had a few losses in life and need to find our ‘mojo’ to once again have the courage to get up and have another try. It’s unfortunately a part of growing up and becoming an adult.

We dream big, we try the impossible… and sadly, many times, things do not work out the way we plan them. At least, that is the case the first time around, and as many successful people will tell you, it is often on the second, third, fourth… even fifth attempt that, with all of the knowledge and experience of what went wrong the previous times, you can finally see breakthrough.

Ray Keipert is an Australian author who, from a young boy, has always had an interest in creative writing. In his new book, Life’s Winners … and a Few Losers, the theme for the book was developed as he drafted stories over a period of about three years. As Ray told me, he cast his mind back to people he’d met and places he’d been to, not to mention challenges he had met in his own life.

With age comes wisdom and Ray has taken the time to look back on a range of people – some massively successful, while others not so much – to find out what it is that makes people tick.

“I always loved writing, even as a young boy at primary school,” Ray said. Sometimes, interested teachers would get me to read my school compositions out to the class, so that was some affirmation of my writing. However, once I was in the workforce as a teacher of modern languages, I rarely seemed to have the free time necessary to concentrate on writing. One exception was in the mid-1970s, when I was teaching in England and had time to write during a winter vacation.

I completed a short novel (still stored in the bottom drawer of a garage cabinet). I did send it to a couple of British publishers, but they felt it needed much more work – no doubt it did – and I left it alone. Now that I am retired and have joined a University of the Third Age writing group, I feel much more motivated and have more time to write.”

Most of the stories inside Ray’s inspiring book are based to some extent on true situations, with names and places changed to keep the subjects of the stories anonymous. “In terms of the stories enclosed, there is a thread of truth in most of them,” Ray said. “It could be someone I’d met and quite often, places I have visited. As an example of a minor victory, the ‘Halls of Justice’ story represents me being vindicated in court when I contested a parking fine which I felt was unjustified.

“’Christmas Lunch’ was based on a real event, where a teenage girl was accidentally killed by a wayward golf shot hit by her best friend. The parents of the dead girl reacted magnificently to the girl who caused the death, doing much the same as the reaction in my story.

“As another example, ‘Five and a Half Centimetres’ is, as you see in the book’s final acknowledgement, a depiction of a real event that happened in 1963. Why did I write the story? Well, I remembered when that dramatic escape took place in 1963, recalling that the escapees had used a cut-down sports car. Having substantially written the story, I checked the events on the Internet, yes, there it was, complete with the names. Thus it was fitting to write an acknowledgement.”

So just what is it that makes someone continue through to see their dreams come to life, when others give up, not able to handle the emotional roller coaster? In the words of Ray Keipert: “I think it is strength of purpose that enables some to have success and others not; the ability to persevere in the face of discouragement. I equate it to taking a yacht through often stormy seas: you keep the bow pointing upwards so the waves don’t swamp it. Have Christian faith and pray to the Lord for strength  – I would urge everyone to do so.

“Another key ingredient is strength of character. You need to have that ‘stickability’ in your nature to not be put off by discouragement. Education, devoting time to your craft, surrounding yourself with those who offer encouragement, being reliable and trustworthy, honest in your dealings… all these positive virtues are essential to ensure you emerge as one of life’s winners.”

As a Christian author, Ray stated the importance of having a Christian faith as the base line for a successful life. “On top of this, one must resist fear and panic,” he said. “Everyone should keep company with positive people. Negative people engender fear, which is destructive. Finally, do some uplifting and motivational reading. I do hope that my book provides that and sets people on a pathway to be one of life’s winners.

“While it is easy to make the assumption that this book is for high-achieving Christians, I hope that it motivates people who have had a few losses to find their way back. I trust that they will be inspired to try again when they see ‘ordinary people’ responding to sudden challenges.

“I also deliberately included ‘minor’ matters such as the parking fine and the ‘resistance’ man who refused to pay for his radio and TV licence (abolished in Australia in the 1970s) to indicate that sometimes, minor concerns can become too big in people’s minds. They just have to come to see their problems in proportion and not blow the issue into something that it is not.

“Successful people are good at this. As the old saying goes, they don’t ‘make a mountain out of a molehill’. They don’t over-emphasize their challenges and so, with a calm head, plus prayer and faith, they can work clear pathways to get beyond the challenges they face.”

How you can ensure you’re one of Life’s Winners.. and not one of the Few Losers.