Many writers struggle to find the time it takes to sit down at their desk to produce a book, but for this author, a new baby that wouldn’t sleep became the perfect impetus to complete a much anticipated book. Schoolteacher David Folker had been dreaming of completing his book, and oddly, thanks to the birth […] 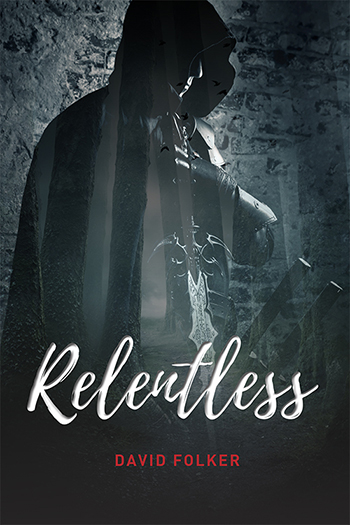 Many writers struggle to find the time it takes to sit down at their desk to produce a book, but for this author, a new baby that wouldn’t sleep became the perfect impetus to complete a much anticipated book.

Schoolteacher David Folker had been dreaming of completing his book, and oddly, thanks to the birth of his second child, Relentless has now been released globally.

“I drafted the idea for Relentless four years ago and began by mapping out the characters and ending, along with a rough outline of the journey,” David told me. “Unfortunately the demands of the leadership position I held at the school I worked at meant that I had little time for creative writing and so it was put to the side until such a time that I could commit sufficient energy to see it completed.

“When our second child arrived happy and healthy, it became clear that neither of us would enjoy the luxury of extended periods of sleep throughout the night. I realized that this was the perfect time to continue the story that was put on my heart all those years earlier. With this in mind I spent several hours each night writing and a few months later, Relentless was completed.”

David stated that while Relentless was a story is for everyone, and he believes most people would enjoy the brisk pace, action, character development and its resolution, at its deepest level it is a story of encouragement. It was written to speak to people who have accepted the lie that they are not worthy of their Savior’s love.

In this powerful new book, the characters in this remarkable story race to save someone who most others would have given up on. They face impossible odds and a terrible foe. They are knocked down on many occasions, but they don’t give up. Relentless explores the self-sacrificing of a hero: that hero being Jesus.

“I wrote this story because I believe that there is someone out there that needs to hear that they are worthy of a Savior’s love,” David continued. “That he will never stop pursuing them. That he will do anything to save them. If this title reaches that one person, who needs to be assured that they are worthy of such relentless dedication by our all-sacrificing God, then I will be happy.

“Growing up, I was an avid reader and enjoyed books from a variety of authors, both fiction and non-fiction. I was first introduced to the genre of fantasy by my Aunt Meg when she gifted me a copy of Rowan of Rin by Emily Rodda. I’ve been reading fantasy non-stop ever since.

“There were three major influences on my writing of Relentless. The first was the classic fantasy novel The Hobbit by Tolkien. When re-reading the story prior to the release of the blockbuster movies of the same name, I marveled at the scope of the grand adventure the unlikely companions found themselves on, but also the clarity of their journey. They knew exactly where they were going, if not what they would encounter along the way. I wanted to write a story that had a clear end destination and then unpack the risks and the wondrous/dangerous locales that the characters would journey through.

“The second major influence was Pilgrim’s Progress by John Bunyan. I read this when I was a student at primary school and the idea of a physical adventure representing a spiritual journey was one that resonated with me. To an extent, I think all of my titles will be mirror this notion.

“The third influence and probably the clearest is one of the parables told by Jesus. For reasons of spoilers, I can’t tell you which one! I would like to think that readers familiar with the teachings of Jesus should be able to pick it when they reach the end.

Relentless is now available at all good bookstores, including Amazon.

N.B. If you like to know more about Relentless and David’s future projects, you can follow him at https://www.patreon.com/davidfolker