Are you or someone you love wrestling with faith and LGBTQIA questions? Book affirms LGBTQ persons can be part of the body of Christ, gives relating keys FAITH NEWS SERVICE – MIDVALE, Utah, Sep. 13, 2022 – College media instructor Karl W. Beckstrand has realized most of his bucket list. He has lived abroad — […] 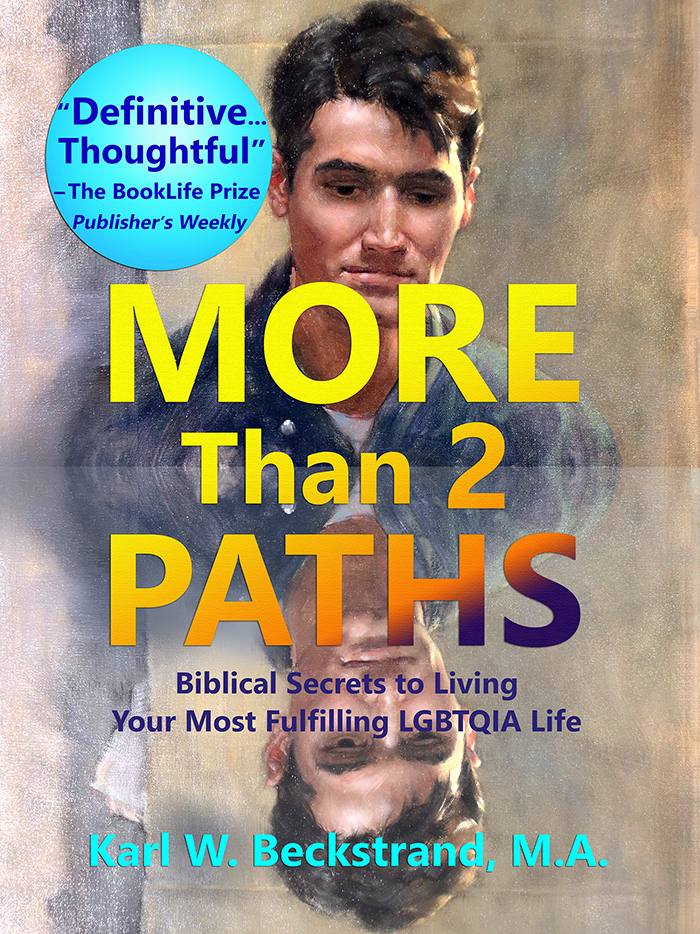 Are you or someone you love wrestling with faith and LGBTQIA questions?
Book affirms LGBTQ persons can be part of the body of Christ, gives relating keys

But Beckstrand’s early relationships were far from satisfying. While his ego might now take credit for decades of deep stable relating with both sexes, Beckstrand knows it was a power beyond his own that brought true lasting connections.

Are you or someone you love wrestling with faith and LGBTQIA questions? Beckstrand’s newest nonfiction book, “More than 2 Paths,” offers insights to bolster confidence in God’s love and plans for each person — differences and all, plus relating keys.

“I was about to marry a beautiful woman,” says Beckstrand, “though I’m attracted to men and women — and had been pretty sexual with men when younger. Because I could see nothing good in my same sex attraction, I’d grown up hating that part of me.”

The engagement ended over other differences, but Beckstrand, who hadn’t been sexual with a man in many years, feared going back to an out-of-control life. “I was trying to avoid men completely — because that’s what I thought God wanted me to do,” he says.

Instead, God showed him that “He not only accepts queerness, it is — expressed attentively — part of his plan for happiness,” says Beckstrand. “Has anything taken God by Surprise?”

Beckstrand explains, “Not only does God love us with our differences, He has a purpose for the differences we compare ourselves to others with. Attraction to one’s own sex is not a sin nor is it contagious — and it’s not a mortal choice. Why would I choose to be attracted to guys when most men don’t welcome such interest?”

“My same sex emotional needs (like for those for food) are God-given, meant to be met healthfully — not in servitude, not bottled up,” says Beckstrand. “I’ve learned that people of the same sex were made to love each other deeply and long-term (and in some ways better than men and women love each other).” Yet, long-term relating bliss can be elusive for anyone — even for straight people.

“God can help us meet our needs,” says Beckstrand, “but He won’t remove them.”

Given Beckstrand’s compulsive history, for a time he wasn’t sure how to meet his same-sex emotional needs. “Often, people see only binary options,” he says, “yet, there are infinite ways to be human, let alone LGBTQIA — and more levels of connection than we know — happier than the sparse paths the world often signals. We miss blessings by ignoring God’s input on how connectedness and happiness are attained.”

Beckstrand’s profound ongoing unions sprung from the loss of relations and expectations that he’d previously held as important. He shares scriptural keys to transforming relationships and creating lasting, healthful connection with those of one’s own sex.

One key is to never confuse euphoria with love. “People who think euphoria is love guarantee that they’ll soon be out of love, given the temporary nature of that feeling,” says Beckstrand. “When people abandon the quest for euphoria, they can more easily find true relating.”

Becktrand says, just about anyone can find lasting, loving relationships. “God can help us fulfill our needs as we honor His will in all relating,” says Beckstrand. “As you realize that true needs are being met, bliss and generous impulses toward others can replace discouragement, isolation, lust, even addiction.”

“I never dreamed fulfilment would come via male-to-male connection — or that even straight people have needs for same-sex connection (independent of euphoria, though non-sexual euphoria can be part of ordinary human interactions),” Beckstrand says.

Seeing more options may require some thought and introspection. “Your best relationships may not be the one(s) you’re currently in, pursuing, or think you’re missing out on,” says Beckstrand, “or they may not come about in the way you’re trying to build them.”

What Beckstrand has learned about same-sex connection applies to heterosexuals, LGBTQIA, married people, singles, men and women. “I believe a change in what/how you seek could save you decades of frustration and heartbreak and fulfill you beyond your current expectations,” he says. “Awareness of options increases power/satisfaction. I love who I am, and I want others to feel self-love, God’s love, and profound love with others.”

Chapters include: “Beyond Either/or Thinking, How to Not Miss Out, Is It All about Sex?, What’s Good About Attraction to Your Own Sex?, Is Fluidity Real?, Are Competing Desires Healthful?, Is Mixed Orientation Marriage a Happy Option for Some?, Authentic Identity – The Key to Happiness” and “Close Beyond Imagination.”

Beckstrand is the winner of a 2016 International Book Award and has 65 e-book titles. “More Than 2 Paths” — called “definitive” by Publisher’s Weekly — can be found in hard cover, soft cover, e-book, or audiobook on PremioBooks.com, Amazon, libraries, and all major distributors.