For Christian women contemplating abortion, this woman might make you think twice

FAITH NEWS SERVICE – As abortion is affecting more and more women around the world, the story that is never told is the after effects. We hear so much about women’s rights and why women have the right to do with their bodies what they want, but there is a sinister side to abortion that […] 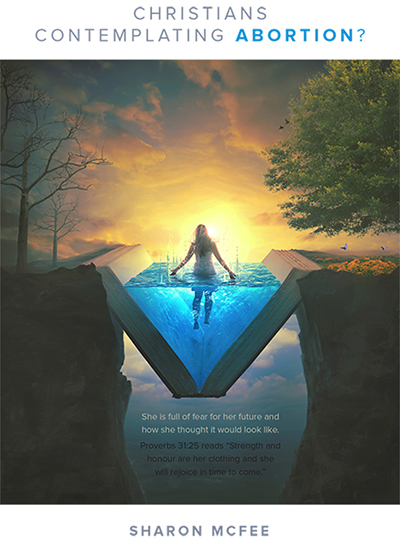 FAITH NEWS SERVICE – As abortion is affecting more and more women around the world, the story that is never told is the after effects. We hear so much about women’s rights and why women have the right to do with their bodies what they want, but there is a sinister side to abortion that rarely gets told.

Sharon McFee is well versed to write on the subject of abortion. While many know the theory of abortion, as there is so much information that circulates on the Internet, Sharon experienced her own abortion in her late teens.

As she opened up on her abortion experience, she began to notice that many of the women in her church had also had abortions, stating that she believes “one in four” of them had also experienced this devastating procedure.

“By the time I recognized this trend, I had already written and self-published my first book, Reconciled From Abortion’s Chains,” she told me, “which is a very honest account of my life and the choice I made within days of finding out I was pregnant.

“I had bought into the lie that this was my body and my life and what I did with it was only my concern. I also relate how, after marrying and settling down and having my own family, that God had a miracle in store for me because He loved me, saw me, knew me and heard my heart.

“I realized that abortion is such a big topic, affecting almost all peoples’ lives in one way or another, and I had a story to tell of God’s grace and forgiveness and love.”

While Sharon’s second book, Christians Contemplating Abortion? sounds like a contradiction in terms, she told me that she felt God reveal to her that there were many unmarried Christian women who had found themselves in the predicament of expecting a baby after sleeping with their boyfriend.

“Her next decision is, will she continue the pregnancy and keep the baby and everyone will find out, or will she opt for the quick-fix solution to save face?” she said. “Sad to say, I think this is a much bigger issue than the Christian world realizes. The pastor came up to me one day after the church service and prophesied that I was to write another book and my husband Peter said he could see 21 small chapters.

“In the middle of that night, I woke up and it was highlighted to me how I had felt at the time when I was 18 years old: so very young, single, scared and pregnant and all the thoughts that were running through my head. I genuinely believed that falling pregnant when I was single could not possibly happen to me. I was fearful of being rejected by everyone. I had been the goody-two-shoes, compliant child growing up and I especially dreaded my father’s would-be reaction. I didn’t have a clue how I would be able to provide for myself and a baby.”

Like so many women, Sharon felt alone and isolated and so abortion seemed like the right option – for that time of her life. However, as many women who have had abortions come to realize, it is a decision that stays with them for the rest of their lives.

“I never even gave one thought of the life of the unborn child I carried and the future that he or she may have had,” Sharon continued. “The bite-size chapters in the book begin with a scripture where I defend life and use my voice on printed paper as a voice for the voiceless, for those who cannot speak for themselves. The purpose of this book is to clear all the confusion from the mind of the reader and to give them another path to choose.

“Both my books need to get into the hands of young women, even high schoolers, before there is any possibility of them finding themselves in this situation because somewhere along their journey, it is decided beforehand by them what they would do: they would control their own future and they would take matters into their own hands.

“We live in a microwave world, where everything comes to us quick and easy and conveniently and thereby a lot of Christians haven’t developed the characteristics of long-suffering, perseverance and enduring, which the Bible talks about. These are the traits that come with maturity. Unfortunately, organizations like Planned Parenthood, who propose to be there in every way to provide abortion care, are offering the quick fix by ending a child’s life, implying that everything will be resolved then and there. But the truth is that, yes, outwardly, there will now be no evidence of a forthcoming baby, but inwardly, the soul weeps. The soul remembers. The soul grieves. The soul regrets. And to which there can be no denial.

“I have heard of reports of mental distress following an abortion, even to the point of suicide for some, often increased alcohol and drug use, and then there’s the possibility of nightmares, post-natal depression after having a baby, and so on. The ongoing after-effects of a bomb going off. The saddest part is that the instigator of the woman having the abortion is usually the woman herself, ultimately, and she is unknowingly causing grievous bodily harm to herself and her unborn child.

“It goes completely against the grain of our deep inner conviction that life must be saved at all costs. It’s double-minded and it’s a lie. For a woman who believes she’s a Christian and then to seriously consider having an abortion is an oxymoron.”

The argument among many women is that the pregnancy was caused by rape, a one-night stand, or even a short-term relationship. Or the woman is not in a financial position to be able to look after the child. However, one only needs to talk to adoption agencies to see how many couples are crying out for a child. That woman, while she feels helpless in that moment, actually has options available.

In addition, some women feel as though if the baby’s life is ended that they will not have the guilt of wondering where their child is and who is looking after them, but as Sharon has explained, the ongoing implications stay with the mother for life.

“I don’t believe there are any grounds for a Christian woman to consider an abortion, not even if she was raped,” says Sharon. “God is the Author of life and life is sacred and we must not be like our own god in our lives. The unborn baby, once on the way, has a right to be born alive, full-term, because this little one is also precious in His sight. If the Christian woman could absolutely not be able to care for the child due to psychological reasons, or due to financial inability, then adoption is a wonderful alternative, where the child will be well loved and valued.

“I would say to the young Christian woman who may consider abortion, should she find herself in an unplanned pregnancy, please read my book Christians Contemplating Abortion? It’s a quick read, but I encourage you to read it before making your final decision.

“Listen to the older Christian women who have gone before you and to the wisdom God has placed inside them so there will be no regrets for the rest of your life. Learn from their mistakes and pain.”

Sharon hasn’t just written two books on abortion; she is actively involved in helping women to this day. She is involved with Yahweh House, a place on Australia’s Gold Coast which has a vision to see a safe home for babies and pregnant women where women would be supported throughout their pregnancy and after care. A large team of people from all different backgrounds and churches have got behind the vision, which provides an alternative to abortion.

While Sharon is able to help women who are able to get to Yahweh House, her books allow her to reach women all over this world.

“My heart goes out to Christian women who do not know where to turn when they first discover a positive pregnancy test result,” she said. “I cannot emphasize enough the importance of letting a significant, supportive person know what is happening and to be a listening, yet non-judgmental sounding board at this very vulnerable time. Perhaps a grandmother who is close to her, or an aunt, her mother or sister or a friend… someone who loves this woman and will give strong, clear advice, particularly from the Word of God.

“And, if there isn’t a significant person, look to the Bible or contact pastoral care at church, or perhaps ring a pregnancy helpline like Right to Life in Australia, Priceless Life in Brisbane, or SpeakHope.net in the USA. It can be a very confusing time, with many thoughts running through her head. It is never God’s will to harm, but to bless.

For any woman contemplating abortion, I would like to ask her: what is your perception of life? Our perception is the way in which something is regarded, understood, or interpreted. And I put to you John 10:10 (NKJV): “The thief does not come except to steal, and to kill, and to destroy. I have come that they may have life, and that they may have it more abundantly.”

For Christian women contemplating abortion, this woman might make you think twice