A prophetic warning—and message of comfort and hope–in uncertain times. FAITH NEWSWIRE – Monument, CO, April 20, 2020—Exploration Films announced this week that they have begun distribution of Before the Wrath, a powerful film that provides a timely message of comfort and hope based on true discoveries from the time of Christ. Researchers in the […] 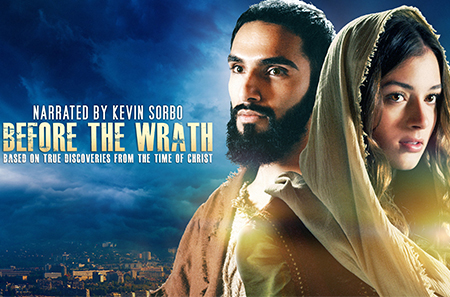 A prophetic warning—and message of comfort and hope–in uncertain times.

FAITH NEWSWIRE – Monument, CO, April 20, 2020—Exploration Films announced this week that they have begun distribution of Before the Wrath, a powerful film that provides a timely message of comfort and hope based on true discoveries from the time of Christ. Researchers in the Middle East present new evidence and shocking insight on the biblical prophecies of Christ’s second coming. Before the Wrath reveals how and why he will return for His Bride—Christians who faithfully wait for the Bridegroom, Jesus Christ.

“As fear consumes the world, Before the Wrath is the perfect response to why we have faith in the Lord’s return. This powerful film acts as not only a warning, but also a great comfort,” said Stephen Penn, “God’s timing for this release comes when people are confined to their homes, desperately seeking a message of hope.”

The film soared to the #1 documentary spot on Amazon in March/April. Daystar Television recently broadcast the film worldwide Saturday, April 11. Based on the book by Middle East Anthropologist, Jay McCarl, and narrated by Kevin Sorbo, Before the Wrath documents Jesus’ references to “an ancient Galilean ceremony passed on through generations that shows how Christ will return.”

“This is the most profound discovery in human history,” declares Theologian and Senior Pastor, J.D. Farag in the film. Scholars reveal the year-long timeline of an ancient Galilean wedding, including the distinct role of the groom’s father, the initial covenant between the groom and bride, their time spent apart, waiting until the father tells the son to go to the bride’s home—in the middle of the night–and bring her back for the wedding feast.

Research results shared with viewers by Scott McConnell, Executive Director of LIFEWAY Research, show that most people, including a majority of church goers. no longer believe in Jesus’ second coming. But Middle Eastern anthropologist, Jay McCarl states “this discovery proves that he is coming back.”

Before the Wrath also presents the amazing findings of Amir Tsafati, founder of Behold Israel, Jan Markell, founder of Olive Tree Ministries, Jack Hibbs, and other specialists of Middle Eastern culture and biblical theology. Researchers show how Jesus spoke to the people of Galilee in a way they would understand, referring to their Galilean culture. Placed in context, these ‘pieces of a puzzle’ reveal a prophetic timeline that shows how and why Jesus Christ will return–and warns the world of what’s coming.

Based on the demand for hope and encouragement in these dark times of the COVID-19 pandemic, the release of Before the Wrath could easily become on the top Christian films of 2020. Produced by Ingenuity Films, and distributed by Exploration Films, Before the Wrath features exciting interviews, and well-produced scenes depicting Jesus’ first miracle at a wedding in Cana of Galilee, and also how Galileans understood the ancient ceremonial timeline of a wedding.

Ingenuity Films is a growing California production company that explores an array of debated topics of which newly discovered findings could reshape worldviews. They have produced two bestselling films in the United States and have received over 30 awards and nominations for best documentary, writing, cinematography, and editing.

The director of Before the Wrath, Brent Miller Jr, has been featured as a guest on numerous national TV and radio programs and is a frequent speaker at some of the largest prophecy conferences in the United States. Brent Jr has over twenty years of experience working in new media and film production with several Fortune 500 companies, including MTV in New York City.

After Brent Jr personally witnessed the horrific events of 9/11 while living in Manhattan, Ingenuity Films was founded to combat rising misconceptions from sensationalized eschatology that is detrimental to publically perceived biblical validity. Through utilizing apologetics, Ingenuity Films is now reintroducing biblical theology to millions of people that have previously marginalized the topic with unprecedented effectiveness.

Christian pastors, and churches will surely benefit from watching this impressive, insightful documentary that reignites hope for Christian believers worldwide, and prepares the world for the aftermath of Christ’s return.

Before the Wrath is now available in DVD/BluRay & Digital HD at ExplorationFilms.com, Reelhouse.com, Amazon, Christian Cinema, Beforethewrath.com and other numerous places. The film will continue to be released on several other digital platforms in the coming weeks. Before the Wrath is also being prepped for release internationally in Asia & Europe.

As a leading indie film distributor, Exploration Films brings quality faith and family documentaries and feature films to market. The Colorado-based team strives to deliver inspiring content that elevates the culture, and evokes the best in the human soul.

For more information, please email Stephen Penn at penn.stephen@explorationfilms.com Screeners of the film are available upon request.