Cry For Hope: A call to decisive action as we serve God and the oppression of the Palestinians

FAITH NEWS SERVICE – We, Kairos Palestine and Global Kairos for Justice, a worldwide coalition born in response to the Kairos Palestine “Moment of Truth: a word of faith, hope, and love from the heart of Palestinian suffering,” issue this urgent call to Christians, churches and ecumenical institutions. We do this together with committed Christians […] 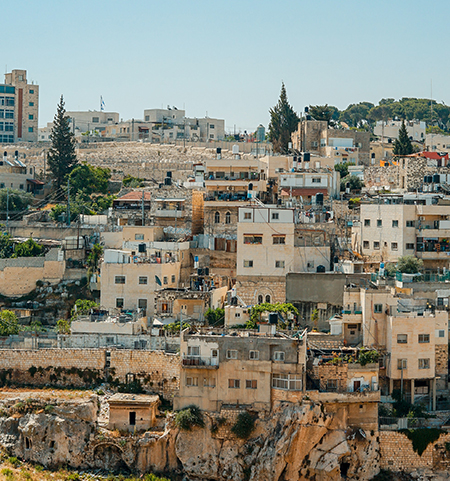 FAITH NEWS SERVICE – We, Kairos Palestine and Global Kairos for Justice, a worldwide coalition born in response to the Kairos Palestine “Moment of Truth: a word of faith, hope, and love from the heart of Palestinian suffering,” issue this urgent call to Christians, churches and ecumenical institutions. We do this together with committed Christians in Palestine and around the world. This is a call for decisive action on a matter that we believe relates to the integrity of our Christian faith.

We have arrived at a critical point in the struggle to end the oppression of the Palestinian people. The State of Israel’s adoption of the Nation State Law in 2018 legalized institutional discrimination in Israel and the Palestinian territories, officially depriving Palestinians of their rights to life, livelihood, and a future in their homeland. Recent acts of the U.S. administration have supported Israel’s ongoing project of land taking and attaining control over the entire territory of Palestine. These include the 2018 move of its embassy to Jerusalem, its announcement in 2019 that the U.S. government no longer deems West Bank settlements to be “inconsistent with international law,” and the 2020 “Peace to Prosperity” plan.

Fueled by U.S. support and emboldened by the ineffectual response of the international community, Israel’s newly-formed coalition government has cleared the way for outright annexation of around one third of the occupied West Bank, including the Jordan Valley. These developments make it all the more clear that we have come to the end of the illusion that Israel and the world powers intend to honor and defend the rights of the Palestinian people to dignity, self-determination, and the fundamental human rights guaranteed under international law, including the right of return for Palestinian refugees. It is time for the international community, in light of these events, to recognize Israel as an apartheid state in terms of international law.

In affirming this reality, we realize that it is incumbent upon us as followers of Jesus to take decisive action. The very being of the church, the integrity of the Christian faith, and the credibility of the Gospel is at stake. We declare that support for the oppression of the Palestinian people, whether passive or active, through silence, word or deed, is a sin. We assert that Christian support for Zionism as a theology and an ideology that legitimize the right of one people to deny the human rights of another is incompatible with the Christian faith and a grave misuse of the Bible.

We call upon all Christians and on churches at congregational, denominational, national, and global ecumenical levels to engage in a process of study, reflection and confession concerning the historic and systemic deprivation of the rights of the Palestinian people, and the use of the Bible by many to justify and support this oppression. We call on churches to reflect on how their own traditions can express the sacred duty to uphold the integrity of the church and the Christian faith concerning this issue. We cannot serve God while remaining silent about the oppression of the Palestinians.

As we face this kairos, we are mindful of the legacy of faith and action of those who have come before us and have faced circumstances of urgency and crisis. In 1933 German pastor and theologian Dietrich Bonhoeffer declared that the Nazi regime’s denial of the rights of Jews and the interference of the state into matters of religion placed the church in status confessionis. The Barmen Declaration of 1934 reinforced the church’s obligation to stand up to injustice and to unequivocally oppose ideologies of tyranny. In 1964 the first General Secretary of the World Council of Churches (WCC), Willem Visser ‘t Hooft, stated that racism, like apartheid, constitutes a status confessionis for the churches.

The WCC followed this word with action in 1969 in implementing its courageous and far-reaching Program to Combat Racism. In 1977 the Lutheran World Federation (LWF) declared that “apartheid created a status confessionis for the church” and in 1984 suspended the white Lutheran Churches in Southern Africa who practiced apartheid. In 1982 the World Alliance of Reformed Churches (WARC) declared apartheid incompatible with Christian belief, and suspended the member churches practicing racial separation.

The World Communion of Reformed Churches (WCRC) in 2017 affirmed “that with respect to the situation of injustice and suffering that exists in Palestine, and the cry of the Palestinian Christian community, that the integrity of Christian faith and praxis is at stake” and directed the General Secretary to initiate six direct action steps. Since 2009, Kairos documents from ecumenical organizations from around the world have appeared in response to the Kairos “Moment of Truth” document of the Palestinian Christians, pledging action and providing theological affirmation of this prophetic call by the Palestinian churches.

The present times call for actions as bold, as faithful, and as resolute. The time for decision has arrived. “We call out as Christians and as Palestinians to our Christian brothers and sisters in the churches around the world” reads the 2009 Kairos Palestine document. Eight years later, in 2017, in the Open Letter to the World Council of Churches and the ecumenical movement, the National Coalition of Christian Organizations in Palestine wrote: “Things are beyond urgent. We are on the verge of a catastrophic collapse. This is no time for shallow diplomacy, Christians!”

Now, three years later, this is a cry for hope to our brothers and sisters throughout the world. We invite our fellow Christians, their local congregations, churches and international ecumenical organizations, to receive and respond to our common witness, to join the process of confessing, and to initiate processes to formally reject the oppression of the Palestinian people and any use of the Bible to justify this injustice by committing to the following actions:

We make this call out of concern for the future of both peoples. In the words of Kairos Palestine, our call is rooted in the logic of love that seeks to liberate both the oppressor and oppressed in order to create a new society for all the people of the land. We continue to hold firm to the hope articulated in the Kairos document that Palestinians and Israelis have a common future — that “we can organize our political life, with all its complexity, according to the logic of love and its power, after ending the occupation and establishing justice.” As followers of Jesus, our response to ideologies of exclusivity and apartheid is to uphold a vision of inclusivity and equality for all peoples of the land and to persistently struggle to bring this about.

We acknowledge that by our commitment as Christians to the liberation of the Palestinian people we stand against the theology of Empire, a global order of domination manifesting in racial, economic, cultural, and ecological oppression that threatens humanity and all of creation. In making this confession, we embrace our membership in the community of the broken bread, the church fulfilling its mission to bring the good news of God’s gift of love, mercy, compassion, and abundant life for all.

Cry For Hope: A call to decisive action as we serve God and the oppression of the Palestinians