How does a single mum leave behind a life in the city to become a foster parent to Australia’s indigenous community? Cathleen Hope is a remarkable woman who took up the challenge of travelling to a place that most women would never dream of and she has documented it in her new book, Dare to […] 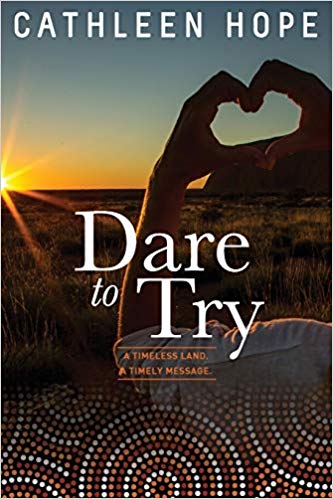 How does a single mum leave behind a life in the city to become a foster parent to Australia’s indigenous community? Cathleen Hope is a remarkable woman who took up the challenge of travelling to a place that most women would never dream of and she has documented it in her new book, Dare to Try.

For those who reside outside of Australia, it is probably hard to imagine that the central part of the nation is barely liveable. A country the size of America, the population is just a fraction of the US because of how barren so much of the country is.

Central Australia is, by and large, populated by the country’s Aboriginal community, otherwise known as the Indigenous, and for Cathleen Hope, it became her mission field.

“Essentially, my story is also a spiritual story to redemption,” she tells me. “What do you do when you find redemption? You want to tell others. First my family and then ‘the ends of the earth’. Central Australia, in terms of language, culture and distance from any capital city is my ‘ends of the earth’”.

Cathleen’s life changed when she became a Christian. “After becoming a single mum, bringing up three littlies was tremendously daunting,” she stated. “The peace I experienced once I was able to put my faith in God was liberating. I had a heart for fostering children and I initially fostered in Victoria. I have looked after 45 children at various times.

“My biological kids were generally older than my foster kids, which was sensible. My youngest child was five when I started fostering and all three have grown up around other children being in the house. As a family we have grown and been so blessed through having the honour of being part of these foster kids’ lives.”

Looking for a change, Cathleen made the move to the Northern Territory. She started fostering again there after an Indigenous family asked her to look after their four year old.

“Initially, I didn’t realise the child was under the care of the Child Protection Department, a government department that looks after children in child abuse and neglect,” she continues. “Her baby brother was born shortly after and I was asked if I would take him in too. Interestingly, the family only had three stipulations. One, the foster parent had to be a female. Two, they had to be Christian, and three, they had to be white.

“I was floored that this summed me up perfectly. I eventually went to see the baby in hospital and then made the decision to resume fostering so these two could be part of our family and continue to see their own family.”

Cathleen details her experiences of fostering and dealing with the Child Protection Department further in much greater detail, as well as managing her relationship with indigenous people living within their community.

“First and foremost, we are all people and we have our own likes and dislikes,” she tells me. “It is important to find common ground. Indigenous people tend to be incredibly perceptive and they can tell if someone is ‘fair dinkum’. I didn’t try to come into their environment with a ‘saviour complex’. I was genuinely interested in what I could learn from them.

“I have always just tried to be myself. I know they often roll their eyes at some of the things I say and do. We laugh about it, but the respect is mutual. I write about many of my interactions with the First Australians in my book.”

In writing Dare to Try, Cathleen found that it also brought back memories of abuse she received as a child. “I had no intention of writing about child abuse as a personal issue,” she states. “But when I started my book, it was actually the first thing that came out. As I continued the story it continued to creep in. Writing this story was cathartic by forcing me to work through many painful memories.

“The main reason I wanted to tell this story was to help non-Indigenous people understand what it is like living in Central Australia and seeing first-hand the way some of our Indigenous brothers and sisters live. Many people have opinions, but few have actually been here. I can’t speak on behalf of Australia’s first people, but I can share my experiences. And this is what I have tried to do, and let the facts speak for themselves.

“I also wanted to share my story of coming to know the light of the world. Nothing has had a bigger effect on my life than my walk with Yeshua.”

Dare to Try is available now from Amazon and other outlets globally.